You just got back into town from a long business trip. And you’re like, “Hey! No one is talking about what the weather was like yesterday! I wonder what I missed! Even if it was a pretty regular day I’d just like to know about it, you know? Just to ease my mind. Like, the weather channel only ever talks about the weather for today and the future! Unless there was an avalanche or Sharknado yesterday, no one is ever chatting about yesterday! I wanna know about the past, man! I wanna know what I missed!” You talk to yourself a lot.

Either way, my new segment, Yesterday’s Weather, is a perfect fit for you. I’m no meteorologist, but you will find out whatever yesterday’s weather was like wherever I was. The weather channel is always wrong. Get ready for the only weather report that’s 100% guaranteed…it’s time for Yesterday’s Weather.

END_OF_DOCUMENT_TOKEN_TO_BE_REPLACED

I was lucky enough to have Christmas in Hawaii this year. But, before I got there, I spent a couple of days in Los Angeles at my sister’s. One of those days she was very occupied with her boyfriend’s birthday plans, so she said, “Take my car and go visit your friend in Santa Barbara.”

END_OF_DOCUMENT_TOKEN_TO_BE_REPLACED

What if a unicorn just walked into a wall…and got stuck there. Forever. Do you ever think about that?

Like, I know unicorns aren’t real. But what if they were?

That means that they must have been evading us pretty darn effectively for thousands of years. So if they did exist, they’d have to be extremely brilliant, magical, and elusive creatures that have totally outsmarted us dumb humans.

So what if they did exist and there was one unicorn that was really, really stupid. And one day it just…walked into a wall. And got stuck there. And ruined it for all the other unicorns. Because a person found it and that’s how people found out that unicorns were actually real.

All the other unicorns would be like, “Francisco! What are you doing?! You’re freaking magical! We’ve been avoiding walls for thousands of years, Francisco! All you had to do was NOT walk into a wall. That was literally your only job…You can fly. And you don’t even have wings! How have you not mastered avoiding the wall?”

Well, I think about that a lot.

So, if you ever see a horse with its head against a wall like this: 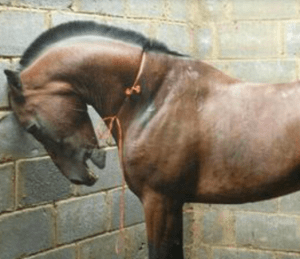 As a lot of conversations among comedians start, I was on the train with my friend Mark. I asked him if he’d seen Master of None (MoN) on Netflix yet. He said, “Yeah! I thought it was awful – I couldn’t watch past the first episode.” And of course I was like, “What?! That’s crazy! I think it’s awesome!”

I lied: his real name isn’t Mark. Way to lose the reader’s trust 15 seconds in.